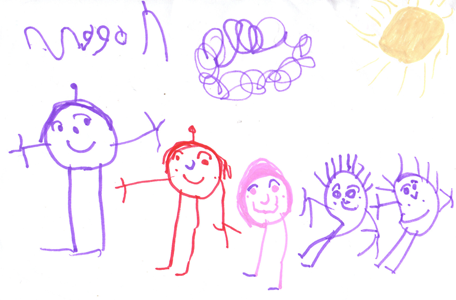 Too often it seems as though we believe children exist only from the neck up — that they consist of brains alone.

In George Graham’s book, Teaching Children Physical Education, he talks about going to school boards to fight for the inclusion of physical education in the curriculum. Yes, he admits, it would be easier and far more cost-effective if we could just bus the children’s heads to school … but, inconveniently, they do happen to be comprised of other body parts, as well. His book also features an illustration depicting headless children walking into a gym. The implication being that we must not move in the classroom or think in the gym.

Lynn University
Featured Program: Get ready to shape the minds of children with diverse needs from birth to age eight with Lynn University’s bachelor’s in early childhood education.
Request Info


Whence comes this fervent belief in the mind and body as separate entities?

The theory can actually be traced back to the work of 17th-century philosopher Rene Descartes. He made a point by proposing it, advancing the thinking of the time. From our perspective, however, its applicability is limited, and it’s beyond surprising that it has lasted until this day. And it’s done great damage in education, resulting as it has in lost potential among students and a system that insists that children sit still in order to learn. The theory runs particularly contrary to everything we know about young children, for whom, as experiential learners, movement is the preferred mode of acquiring knowledge.

The fact is, the mind and body are not separate entities. We’ve known for a long time that a child’s earliest learning is based on motor development and motor learning, but thanks to current brain research, we now know that so, too, is subsequent knowledge. Not only are an infant’s early movement experiences beneficial to optimal brain development; also, the connection between moving and learning continues well beyond the child’s first step.

In Defense of Active Learning

Isn’t it obvious by now that we’ve been trying to facilitate learning in ways that are less than efficient? More and more research is discovering that the brain is much more activated by movement than by seatwork, which increases fatigue and reduces concentration. Noted educator Eric Jensen, author of many books on brain-based teaching and learning, has said that the greater the duration of time in the chair, the greater the depth of student despair.

Other brain researchers agree. Psychiatrist John Ratey has called physical activity Miracle-Gro for the brain. The reasons for such a statement are many. Among them: moderate-to-vigorous physical activity “feeds” the brain with oxygen, water, and glucose, which optimizes its performance. (We would never consider depriving our bodies of food for days, weeks, or months at a time; yet when we fail to move, we’re depriving our brains of food.) Neurophysiologist Carla Hannaford tells us that learning by doing creates more neural networks in the brain than does mere sitting. Additionally, young children find active learning to be more fun and engaging, which means they’re more inclined to learn. And what better way to promote lifelong learning than by making it fun?

Perhaps the most important point for early childhood educators is that young children learn best by doing – and are thus more likely to meet standards when they have the opportunity to experience concepts in physical ways. For example, when young children use their bodies to demonstrate low, high, wide, and narrow shapes, they greatly enhance their understanding of these intellectual mathematical concepts. When they act out words and stories, children add many dimensions to their comprehension – and are far more likely to remember what they’ve engaged with (emergent literacy). When they role-play and pretend to be the negative and positive poles of a magnet, the concept of magnetism comes to life for them (physics).

Studies have proven that young children are experiential learners who acquire knowledge through play, experimentation, exploration, and discovery – what Eric Jensen labels “implicit” learning, like learning to ride a bike. “Explicit” learning, like memorizing facts, may get the information across more quickly, but it doesn’t reach most children at the level of living and doing. It is far less relevant to them and is much more easily forgotten.

A handful of years ago, when the Texas State School Board was debating the merits of making daily physical education part of the curriculum, one board member claimed that doing so would create healthy but dumb students. This thought is, of course, only possible for someone who still subscribes to the myth that the mind and body are separate … and also to the belief that the functions of the mind are superior to those of the body. (Compare a month without reading to a day without digesting. Or a minute without breathing.)

Had this woman, responsible for educational policy, simply looked at the considerable research on the topic, she could not have missed the numerous studies showing that academic scores go up when children are physically active. In one study of over 500 Canadian children, students who spent an extra hour each day in physical education performed considerably better on exams than did less-active children who studied longer. Moreover, children who are more active have a much better attitude toward school.

I once heard a workshop presenter say that we often set up environments for children that run contrary to everything we know about children. Insisting that children sit still to learn is a painfully obvious example.

A long time ago, Confucius said, “What I hear, I forget. What I see, I remember. What I do, I know.” Much later (but still long enough ago to make us wonder why things haven’t yet changed), Alfred North Whitehead proclaimed, “I lay it down as an educational axiom that in teaching you will come to grief as soon as you forget that your pupils have bodies.”

Especially when it comes to early childhood education, we must not forget that children have bodies as well as brains – and that the two are intricately connected.

Bevin Kateri Reinen, a teacher and writer from Virginia Beach, is the Editor of this website. She is the Virginia Beach City Public Schools City-Wide Teacher of the Year and Virginia Region II Teacher of the Year for 2015, and has earned National Board Certification as an Early Childhood Generalist. Bevin is the founder of Teach.Train.Love., an educational blog for parents and teachers focused on promoting the social, emotional, and academic growth of the early childhood learner.